What caused the First World War?

The causes of the 1914 -18 War are long and complex, with the origins starting decades before. In 1871 the balance of power in Europe shifted to Germany, with their victory over France in the Franco-Prussian War. In 1882, Germany consolidated its’ position by forming a ‘Triple Alliance’ between themselves, the Austria-Hungary empire and Italy. This Alliance encouraged mutual co-operation and agreed to help each other if attacked by France or Russia. In 1894, France and Russia formed an alliance to constrain this threat on their borders. Old rivalries and new ambitions created increasing tensions between these imperial powers as they competed for land, resources and trade markets. Nationalism and xenophobia grew throughout Europe over these decades, often fuelled by jingoistic propaganda, which created a widespread facination for war.Worried about German military and industrial expansion, Britain began to build bridges with old enemies. Britain signed an ‘Entente Cordial‘, or friendly understanding with France in 1904, and a ‘Triple Entente’ with France and Russia in 1907, agreeing mutual support if attacked. By 1907, Europe had split into two main camps. These were Germany, Austria-Hungary and Italy on one side, and France, Russia and Britain on the other. As Nations tried to expand, they increased the size of their armies and navies. This was typified by the ‘arms race’ for naval superiority between Britain and Germany from 1898 on wards. A series of colonial disputes between these rivals also added to international tensions, most notably with the ‘Tangiers Incident’ in 1905 and the Agadir Crises of 1911. While these alliances offered some National security, they also ran the risk of dragging other countries into conflict should one nation go to war. This weakness was exposed during the Balkan wars. After the 1912 Balkan War, Serbia, with Russian support, emerged the strongest of the Balkan Nations, and Austria and Hungary felt threatened. When the Heir to the Austrian Hungary Empire was assassinated in Serbia, and Austria invaded Serbia on 28th June 1914, the series of alliances quickly triggered Empires into a global conflict. Austria with German support, attacked Serbia. Russia supported Serbia and attacked Austria Hungary. Germany backed Austria Hungary and declared war on Russia and their ally France. Britain bound by their Entente, joined France and Russia, and when Germany breached the 1839 Treaty of London, by invading Belgium, Britain declared war. Internal problems within each nation also encouraged war. 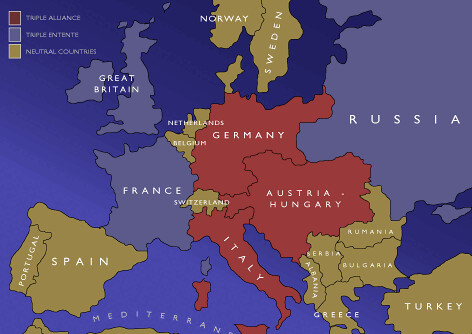 Germany, which was a relatively new nation formed in 1871, was technologically and industrially advanced, and had some progressive social policies. However, it was strongly shaped by Kaiser Wilhelm II, a militaristic leader, whose keenness to expand the German empire, was a destabilising force in Europe. Germany could have withdrawn support for Austria when they attacked Serbia, accepted peace negotiations in July and withdrawn from Belgium when offered an ultimatum by Britain, but Germany refused to back down. Germany declared war on Russia and France, on 1st August 1914

Austria and Hungary was a ‘dual’ monarchy, formed by a merger of the two older states in 1867. While the Austrians were dominant, the empire housed many different ethnic and language groups, which created many political and ethnic divisions. It’s Government, led by Emperor Franz Josef I, was autocratic and dominated by aristocrats and militarists. It started the war by invading Serbia. Austria and Hungary declared war on Russia, on the 6th August 1914.

Russia, the largest of the European nations was poor and underdeveloped. Eighty percent of its population were peasants, illiterate, uneducated and still working the land. In need of modernisation, Russia’s government and social structure was almost medieval. Their Tsar, Nicholas II, ruled with absolute power and was resistent to change. Keen to expand his empire in the East and humiliated by Japan in the Pacific, Nicholas II, supported Serbia, and mobilised the Russian army.

France, still bitter from their defeat to Germany in the 1870’s, was keen for revenge. During the Franco Prussian war, France suffered catastrophic defeats at Metz and Sedan, and saw Paris besieged and occupied. France had to pay a 5 billion franc, ‘war indemnity’ to Germany and cede the Alsace-Lorraine region to Germany, in order to end the war. Plagued by class divisions and poverty, there was dissatisfaction in France over working conditions and political representation. Their President of the French Republic, was Raymond Ponicare, a conservative, nationalist, who antagonised Germany with outspoken criticism.

Britain, although a relatively stable super power, suffered from domestic strife. Britain also had strained relations with Germany. This Anglo German enmity, probably began 50 years before the war, when Britain supported Denmark, against the German reunification of Schleswig–Holstein in 1863. Britain had also sold weapons to France against Germany, during the Franco Prussian war. Germany had bitterly opposed Britain during the Boer Wars and the German Naval Bill of 1908 had directly challenged Britain’s naval supremacy, accelerating a naval arms race between the two countries. Newspapers, propaganda and cartoons of the time, fostered prejudice, alarm and mutual resentment. War against Germany would prove a distraction from Britain’s internal problems at home. In Britain, there was widespread and growing industrial conflict, known as the ‘Great Unrest 1910-14’, a militant Suffragette movement and demands for Irish, Scottish and Welsh Home Rule. Britain’s Liberal Prime Minister, Herbert Asquith, opposed war, but was hesitant and unable to take decisive action to avoid war. When war came, it was seen by many, as a means of uniting their respective nations away from such domestic tensions. 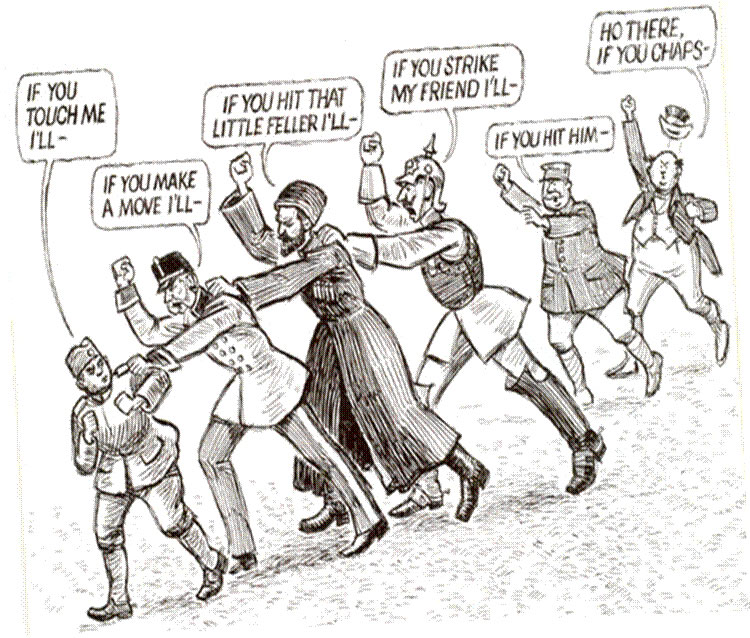 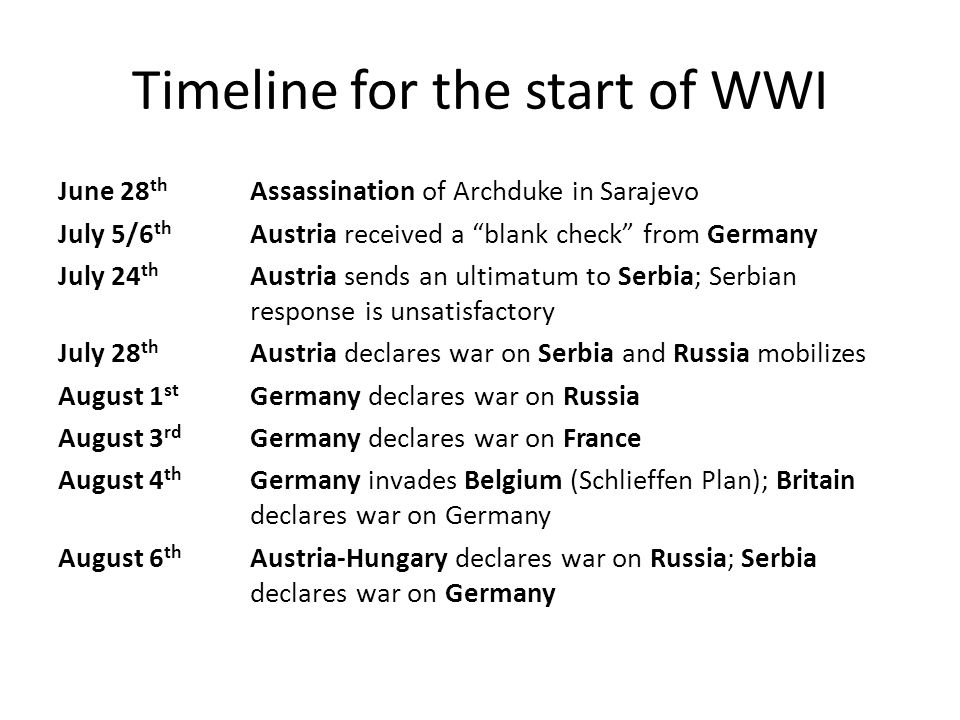 All the Imperial powers had been building up their armies for some time and were confident of victory. Europe was becoming fascinated by war, fuelled by nationalism, empire building and jingoistic newspapers. Europe had not fought a war for 30 years and few understood the killing powers of modern weapons, such as heavy artillery and machine guns. It seems unthinkable today, that countries would embark so easily into a European war, but at the time, Imperial Nations saw war as a legitimate instrument of policy to improve a Nation’s status. In each country the decision to enter the war was made by only a handful of individuals – monarchs, ministers, military people, party leaders ambassadors and others, each with distinct and separate agendas, sharing a culture of paranoia and mistrust. The eccentricities of these Imperial rulers and European leaders at the time, meant no nation was prepared to back down, and they ‘sleep walked’ into war, blind to the reality of the horror they were about to bring to the world. Similarly, the majority of people they ruled followed obediently. Unlike today, there were no news channels, television or social media, to hold the powerful to account. In fact there was little democracy. Most men and no women were allowed to vote. Most people had limited education and left school because they needed to work. They were largely deferential and subservient to their rulers wishes. When war came, populations willingly and enthusiastically joined in their country’s war effort, oblivious to the dangers that faced them.

Whether the First World War was inevitable, or avoidable, or could have been postponed, is the subject of much debate. The general view emerging is that Britain was right to intervene against a German invasion of neutral Belgium. By doing so, Britain preserved its International reputation. Also if Britain had waited for Germany to overun France and the coastal ports, Britain would find fighting a future war with Germany, without its Allies on the continent, much more difficult.

When did the War Start?

The First World War began in the Bosnian capital of Sarajevo on 28 June 1914. This is when a sixteen year old, Bosnian Serb, named Gavrilo Princip, shot and murdered the Arch Duke, Franz Ferdinand and his wife in the streets of Sarajevo.

(Archduke Franz Ferdinand of Austria and his wife descend the steps of the City Hall, Sarajevo to their motor car, a few moments before their assassination.)

Franz Ferdinand was the heir to the Austro-Hungarian dual monarchy, and had been visiting Serbia during a Public holiday. Gavrilio Princep angered by Austria/Hungary’s occupation of Bosnia in 1912, fanatically believed that the assassination of the Austrian Heir would deter Austria away from Serbia and preserve Bosnian independence. It had the opposite affect. In retaliation, Austria and Hungary, supported by their German allies invaded Serbia on 28th July 1914, causing a number of atrocities on its way. Serbia desperate for help turned to Russia their Slavic neighbour, for support. Czar Nicholas the Russian Emperor had the opportunity to leave Serbia to its fate, but not wanting to lose face to his cousin Kaiser Wilhelm in Germany decided to support Serbia.

As Russian armies mobilized, there was a brief opportunity for Germany to prevent the war, by withdrawing its support for Austria. However, Germany ruled by a power obsessed Kaiser, with militaristic ambitions, gambled on winning the war in a few months. Germany declared war on Russia on 1st August 1914, and to avoid fighting a war on two fronts, quickly declared war on Russia’s ally, France. Germany had long planned for this quick and massive invasion of France. This was the ‘Schlieffen Plan’, conceived by the German military, between,1890 -1905, to envelop French forces, with a massive ‘right hook’ via Belgium. The Plan was to capture Paris in 42 days, crush France first and then return to deal with the Russian army later.

There were however difficulties. The French frontier was only 150 miles long and too narrow for Germany to manoeuver it huge army of 700,000 men and another 1.3 million Reserves. The border was also well defended and contained some natural barriers, such as the Ardennes forest, which could hold up a German advance. Faced with such obstacles, Germany went round them and attacked Luxembourg on 2 August, and on 3 August declared war on France. On 4 August, after Belgium refused to permit German troops to cross its borders into France, Germany declared war on Belgium as well. Germany could not afford any delays to the 42 day timetable of the Schlieffen Plan’ and Belgium resistence would be crushed. By invading Belgium, Germany broke the ‘Treaty of London’, that it had signed in 1839, to guarantee Belgium’s Neutrality. Belgium appealed to Britain to uphold International law. Britain was internationally bound to maintain its credibility. Compelled to prevent a militaristic Germany occupying Belgium land and Ports, so close to English shores, Britain initially gave Germany an ultimatum to withdraw from Belgium. This was yet another opportunity for Germany to avoid War. However, when Germany ignored this ultimatum, Britain had little choice but to declare war on Germany on 4 August 1914.

At first, Belgium troops with the aid of the British Expeditionary Force, bravely delayed the German advance for 19 days. This effectively ended the 42 day, timetable for the ‘Schleiffen Plan’. By the end of September 1914, Von Moltke, the German Army Chief, had suffered a nervous break down. He predicted to the Kaiser that Germany would lose the war and was relieved of his Command. It would take another 4 years before Von Moltke’s prediction was realised.Therefore from the assassination of Archduke Ferdinand, in Serbia, on 28th June 1914, It had taken just 37 days for Europe to slide into a raging global war. Ironically, Austria which had initiated the First World War was the last country to declare war on Russia! By the end of 1914, the war had already claimed over a million casualties, of which 300,000 French, 30,000, British and 150,000 Germans had been killed. This was just the first 5 months of war on the Western Front alone.

There had not been a war in Europe for decades. Nations were over confident that their armies were superior and that war would be ‘over by Christmas’. Destructive lessons of recent military conflicts, such as the American Civil War, the Russian/Japanese War of 1904-1905, and the recent Balkan Wars were ignored. These wars had demonstrated that machine guns, heavy artillery and strong defensive positions could cause huge casualties. Europe would soon realize the cost of modern warfare.

The Diplomacy of Declaring War – http://www.lawgazette.co.uk/analysis/comment-and-opinion/passports-please-diplomatically-declaring-war/5042209.article