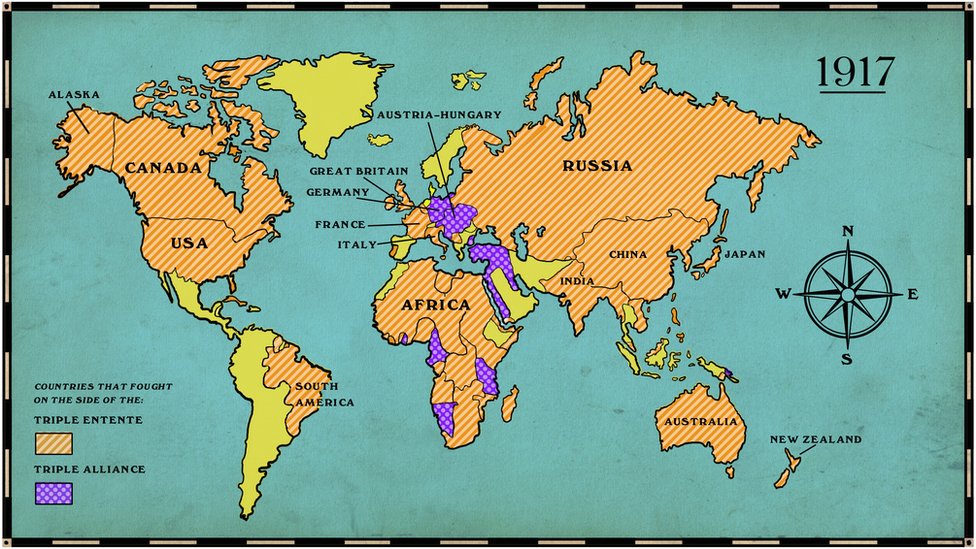 The “Great War”, (or the First World War as it would be later known), was one of the most destructive wars in world history. It was a war like no other, where the British, French, Russian, German, Austria Hungarian and Ottoman Empires merged into two opposing forces. Centred in Europe, the Great War began on 28 July 1914, and lasted until the 11 November 1918. It soon became a global war, fought by 33 countries, across three continents and across all seas, and involving 70 million combatants. It was the first war to be fought in the air, and to develop new deadly weapons, like submarines, machine guns, heavy artillery, tanks, bombers, flame throwers, barb wire and chemical gas to win the war. These 20th Century weapons were pitted against 19th Century war tactics, where massed human waves of attacks, were slaughtered, for just a few yards of ground. Opponents were often evenly matched and there was tactical stalemate. Industrialised warfare could not break the deadlock, but only magnified the horrors of war. On average, over 6,000 soldiers died every day, for four and half years (1,564 days). It cost the lives of more than 9 million troops and 7 million civilians, with another 21 million servicemen and countless civilians also wounded. Each nation was deeply scarred by the casualties, leaving a lasting impact on social memory. Such collective trauma destroyed optimism, and created a term for those killed in the war as “The Lost Generation”. The First World War would pave the way for major political changes, including revolutions in many of the nations involved. The German, Russian, Austria Hungary and Ottoman empires which had ruled with absolute power, now crumbled and by the end of the war, only the British Empire remained. The war marked the beginning of modern history and due to its world impact and significance, was known by those who survived it as “The Great War”. The tragedy of the Great War was that it killed millions of people, and caused such resentment, It would lead to a Second World War, twenty years later.

The cause of the ‘Great War’, was a simple problem of Germany, a relatively new country, wanting to expand its empire and economic influence, over much older powers, like, France, Russia and Britain. The term “Empire” is now a historical anachronism, but in 1914, the world was controlled and dominated by the five European Imperial powers, of Britain, France, Russia, Austria Hungary and the Ottoman Turkish empire. Empire then, was seen as a legitimate instrument to improve ‘civilisation’. Oversea territories and colonies were used as economic markets, to exploit raw materials, control trade and boost national wealth and prestige. The British Empire in 1914, was the largest empire in world history. The Royal Navy ruled the seas, and Britain dominated world trade and controlled one quarter of the world’s population. The Russian Empire was about three quarters the size of Britain’s. French territory was about half the size. The German Empire was only 10% the size of the British Empire. To Germany, whose population increased by a million people a year, who produced more steel than all other major powers put together and exported 90% of the world’s chemicals, this was a barrier to their economic expansion. Germany, frustrated by limited markets and dominated by a militaristic ruling class, increased its army and navy, in preparation to expand its empire. In a tangle of alliances, stretching back decades, a climate of aggressive rivalry and tension between countries, burst into war.

The war drew in all the world’s economic Great Powers, assembled in two opposing alliances: the Allies (based on the Triple Ententes of Britain, France and the Russian Empire, against the Central Powers of Germany and Austria-Hungary. Although Italy had also been a member of the Triple Alliance alongside Germany and Austria-Hungary, it did not join the Central Powers, as Austria-Hungary had taken the offensive against the terms of the alliance. These alliances were reorganised and expanded as more nations entered the war: Italy, Japan and the United States joined the Allies, and the Ottoman Empire and Bulgaria, joined the Central Powers. More than 33 countries, or 1.5 billion people, were formally involved in the Great war, which represented 80% of the world’s population. Only a dozen or so countries managed to remain neutral.

The trigger for war was the 28 June 1914 assassination of Archduke Franz Ferdinand of Austria, heir to the throne of Austria-Hungary, by Yugoslav nationalist, Gavrilo Princip, in Sarajevo. This set off a diplomatic crises, when Austria-Hungary delivered an ultimatum to Serbia, and entangled international alliances formed over the previous decades, were invoked. Within 37 days, the major powers were at war and the conflict soon spread around the world.

On 28 July, the Austro-Hungarians, with German support, declared war on Serbia and subsequently invaded. As Russia mobilised in support of Serbia, Germany invaded neutral Belgium and Luxembourg before moving towards France, leading Britain to declare war on Germany. After the German attack on Paris was halted, what became known as the ‘Western Front’ settled into a war of attrition, with a trench line that would change little until 1917. Meanwhile, on the Eastern Front, the Russian army was successful against the Austro-Hungarians, but was stopped in its invasion of East Prussia by the Germans at Tannenberg. In November 1914, the Ottoman Empire joined the Central Powers, opening fronts in the Caucasus, Mesopotamia and the Sinai. Italy joined the Allies in 1915 and Bulgaria joined the Central Powers in the same year, while Romania joined the Allies in 1916, and the United States joined the Allies in 1917.

The Russian Government collapsed in March 1917, and a later revolution in November, forced Russia to abandon the war, via the Treaty of Brest Litovsk.  This was a massive German victory, only nullified by the 1918 victories of the Western allies. After a stunning German offensive along the Western Front, in March 1918, the Germans pushed too far, and too fast, losing track of their supply lines. The Allies rallied and in the last hundred days of the war, drove back the Germans in a series of successful offensives. On 4th November 1918, the exhausted Austro-Hungarian empire agreed to an armistice. Germany, facing starvation and problems with internal revolutionaries at home, also agreed to an armistice on 11 November 1918. Thus the First World War suddenly stopped, ending in a strange anti climax, with Germany having conquered vast territories in Russia, collapsing, without being either invaded or defeated.

By the end of 1918, the German Empire, Russian Empire, Austro-Hungarian Empire and the Ottoman Empire had ceased to exist. National borders were redrawn, with several independent nations restored or created, and Germany‘s colonies were shared out among the winners. The war had cost over $3.5 Trillion dollars. During the Paris Peace conference of 1919, the ‘Big Four’ (Britain, France, the United States and Italy) imposed a series of treaties on their enemies. Germany was made to accept full responsibility for starting the war and then repay the costs of the war to the Allies, through severe reparations which crippled the German economy. In addition, the German Rhineland was de-militarised and the Germany army restricted to only 100,000 men with no tanks, aircraft, U-Boats or modern weapons. Germany re-unification with Austria was outlawed to prevent this powerful threat ever re-surfacing again. German territories were given away and millions of German speaking people were to become minorities, in the newly formed nations of Poland and Czechoslovakia. These sanctions would humiliate Germany, sowing the seeds for revenge and the Second World War, twenty years later. The ‘League of Nations’ was formed with the aim of preventing another ‘Great War’, but none of the leading powers wanted another war to enforce the sanctions. The ‘League’, was undermined by weakened states, economic depression, renewed European nationalism, and the German feeling of humiliation contributing to the rise of Nazis. These conditions eventually contributed to World War II. The First World War left an enduring legacy which affects the World today. It included the end of empires and the decline of aristocracy; the development of new nations and the desire for self determination, the need for a global system of international co-operation, such as the ‘League of Nations’ and the ‘United Nations’. It led to new political ideas, such as Communism, Fascism, Pacifism, Social Democracy and votes for women. It taught the world about chemical warfare, shell shock, conscription, and led to medical advances, like blood transfusions and plastic surgery. It developed filmed propaganda, war technology and planned economies. It created the ‘Middle East’, the growth of Arab nationalism, Zionist ambition and the emergence of modern Turkey. We still live with its consequences today with troubles in Northern Ireland, the Balkans and the Middle East.

The following timeline highlights the build up to the Great War and some key events between 1914-1918.

The Build Up to War

*  1892 – France and Russia sign a military alliance against German and Austro-Hungary aggression.

*  1894 – Nicholas, is crowned Tsar Nicolas II of Russia. Germany and Russia do not renew their friendship treaty.

*  1901 – Great Britain’s Queen Victoria dies. Four of her nine children are married sovereigns and most of the ruling European Monarchies are related to her. Her Empire measures a quarter of the world and some 400 million people.

*  Oct – Dec 1901 – Anglo-German negotiations break down due to competing interests and differences.

* 1904-06 – Russio-Japanese war results in a disastrous defeat for Russia and major civil rest back home.

*  1905  – ‘Tangiers Crises’ German interference in Morocco, unites France and Britain and forces Germany to back down

*  1908- 09 – ‘Bosnian Crises’ strains relations between Austro-Hungary and Russia. Russia builds up its army.

June 28 – Archduke Franz Ferdinand, heir to the Austria-Hungarian throne and his wife, Sophie, are assassinated by Serbian nationalist Gavrilo Princip, while the couple were visiting Sarajevo.

A stonemason engraving a headstone destined for the grave of a Canadian casualty of the First World War: the bodies of Australian troops, each with its simple wooden cross, are gathered for burial, Guillemont Farm, 3 October 1918; Women’s Auxiliary Army Corp attends a grave at Abbeyville, 9/02/1918.

Thank You to ‘About Education’ for the above Timeline – http://history1900s.about.com/od/1910s/a/WWI-Timeline.htm