Many Irish casualties were recorded on Britain’s war memorials, even when they did not live in the community.

Irishmen were largely excluded from official commemorations in Ireland, and the many Irish communities throughout Britain remembered them on their local memorials. An example, is the war memorial at St Charles Borromeo, Catholic church, in Jarrett Street, Hull, which contains many Irishmen, who did not live in Hull, but were remembered by their relations, that lived in Hull. While this may distort the accuracy of memorials, it is fitting that their sacrifice was recorded somewhere and still can be remembered.

Hull had a large Irish population at the outbreak of war (and still does). Many Irish workers had  been encouraged to move from the Lancashire cotton mills, to begin a rival textile industry in Hull. This built on the ready supply of good quality wool from the Yorkshire Dales, which historically had been exported through the Hull Ports. While the Hull Textile industry was largely unsuccessful, many of these Irish workers remained in Hull and laid down strong roots in the City. As a consequence many men with Irish connections, enlisted in Hull when war began. They worked on the docks and served during the war at sea and in local British Regiments. The names of Irishmen, who lived in Hull are listed on many Hull WW1 memorials.

Due to the complexities of Irish politics before the war, regarding Home Rule, and also events that took place during the war, such as the 1916 Easter Uprising in Dublin, there was much hostility in Ireland, to those Irish men who had fought on the British side.

It is estimated that almost 250,000 men of Irish descent volunteered to fight in the War in the British, Canadian and ANZAC armies. 58,000 of these were already serving in the British Army and Royal Navy before war broke out. Of the Irish men who enlisted in the first year of the War, half were from what is now the Republic of Ireland; the other half were from what is now Northern Ireland. They joined new battalions of the eight regiments which already existed in Ireland and they served throughout the world in all theatres of the war. Some 30,000 men from Ireland died in the First World War, and another 20,000 Irishmen living abroad died fighting for other nations. Many of these deaths were not officially acknowledged in Ireland. It is only in the last 20 years that Ireland has recognized them at any national level. Many veterans returning to Ireland met resentful acceptance, even outright hostility. 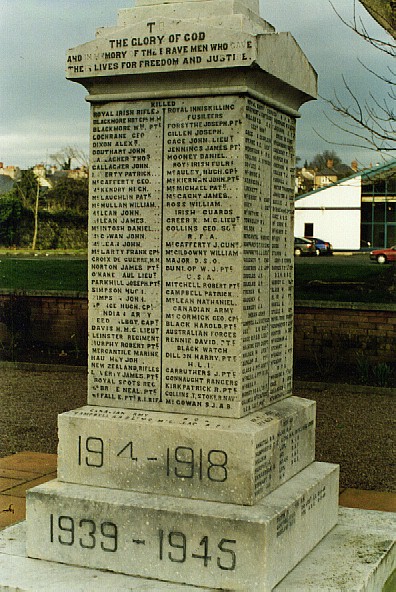 It is estimated that between 1919 and 1922, during the Irish war of Independence, over 200 Irish servicemen, were murdered because they has served in the British army.

When most of Ireland left the United Kingdom on the formation of the Irish Free State in 1922, the five regular, full-time Irish Infantry regiments garrisoned in the Republic, were disbanded. These included the Royal Dublin Fusiliers, the Royal Munster Fusiliers, the Connaught Rangers, the Leinster Regiment and the Royal Irish Regiment, all or which had served with distinction and suffered heavy casualties in the Great War. With their ending, went many of the histories of the men that served with them. The 16th (Irish) Division which was made up of Irish Nationalists and was predominantly Catholic, was for the best part of the century, almost eliminated from the history of the Great War, while at the same time, the achievements of the 36th (Ulster) Division became part of the culture of Northern Irish Protestants. 37 Victoria Crosses were awarded to Irish men in the First World War.

Irish towns and villages particularly in Southern Ireland, did not erect the same permanent memorials as there are in the UK or France. Remembrance Days in Dublin, between 1919 -1925, were consistently marked by rioting between nationalists, unionists and ex-servicemen. Poppy sellers were attacked and remembrance services were disrupted. Over the years Armistice services or Remembrance Days faded in the Irish consciousness. The great mass of Catholic, Nationalist Irishmen who had volunteered and served in the war were quickly forgotten. Their history and experiences did not fit in with either the republican legacy of Southern Ireland or the Unionist tradition of the North.