World War I cost more money than any previous war in history. One estimate suggests $125 – 186 billion in direct costs and another $151 billion in indirect costs, although the full cost is complex and may never be fully known. The Allies had much more potential wealth they could spend on the war. Another estimate (using 1913 US dollars) is that the Allies spent $147 billion on the war and the Germans and their allies, only $61 billion. Among the Allies, Britain and its Empire spent $47 billion and the U.S. $27 billion (America joined the war in 1917) while among the Central Powers, Germany spent $45 billion.

Before World War One, Britain was the world’s economic superpower. With rapid growth and a vast empire, the country enjoyed significant levels of wealth and resources. However it wasn’t ready for the economic impact war would have.
In contrast, Germany’s 1912 budget had approved rising military expenditure until 1917 – effectively militarising their economy ahead of the conflict. 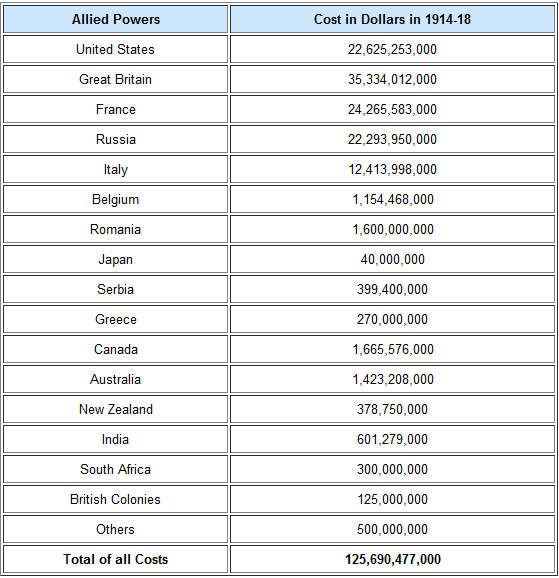 When war erupted in the summer of 1914, Britain faced market panic and a massive financial crisis. Not only did the government need to reassure the markets, it had to prepare itself for the huge economic demands of total war. Facing the financial strain of war, the government had to find ways of raising money. They had three main economic tools at their disposal:
Taxes
Although indirect taxes raised some money, the government turned to direct taxes – on property and income – on a far greater scale. In 1913 income tax was only paid by 2% of the population. During the war, another 2.4 million people would end up being eligible so by 1918, 8% were paying income tax.
Borrowing
This took the form of big international loans but also borrowing from the public through the war bonds scheme. Big promotional campaigns were used to inspire the country to invest in the war effort.
Printing money
Freed from the Gold Standard by the Currency and Bank Notes Act of 1914, the Bank of England was able to increase availability of money by printing it, even though this risked contributing to inflation – rising prices.

In the United Kingdom, funding the war had a severe economic cost. From being the world’s largest overseas investor, Britain became one of its biggest debtors with interest payments forming around 40% of all government spending. The economy (in terms of GDP) grew about 7% from 1914 to 1918 despite the absence of so many men in the services; by contrast the German economy shrank 27%. The War saw a decline of civilian consumption, with a major reallocation to munitions. The government share of GDP soared from 8% in 1913 to 38% in 1918 (compared to 50% in 1943).

Inflation more than doubled between 1914 and its peak in 1920, while the value of the Pound Sterling fell by 61.2%. Reparations in the form of free German coal depressed local industry, precipitating the 1926 General Strike. The Versailles Treaty set German repayments for the cost of the war at 132 Billion Marks. This was to be repaid in cash or raw materials, land given up and services provided. These repayments were suspended in 1932, by which point Germany had repaid only 20.5 Billion Marks (about $6 billion).

British private investments abroad were sold, raising £550 million. However, £250 million in new investment also took place during the war. The net financial loss was therefore approximately £300 million; less than two years investment compared to the prewar average rate and more than replaced by 1928. Material loss was “slight”: the most significant being 40% of the British merchant fleet In sunk by German U-boats. Most of this was replaced in 1918 and all immediately after the war.

Although Britain was ultimately victorious, the effects of war would be felt for many years to come. Foreign trade, a key part of the British economy, had been badly damaged by the war. Countries cut off from the supply of British goods had been forced to build up their own industries, so were no longer reliant on Britain, instead directly competing with her. In 1920/21, Britain would experience the deepest recession in its history.

World War One was a significant moment in the decline of Britain as a world power. It would be gradual, but by the mid-20th century the United States would usurp Britain as the leading global economic power.

Today, nearly £2 billion worth of WW1 War bonds are circulating in the market. War bonds originally paid an interest rate of 5%, but in 1932, as the government battled against a budgetary crisis, the then Chancellor Neville Chamberlain changed the terms of those bonds. He appealed to holders to do their patriotic duty and voluntarily accept a cut in the interest rate to 3.5%. All but a small minority agreed the terms – and that wasn’t their only sacrifice. War bond holders also agreed in effect to accept that they might never get their investment back. Whereas the original bonds had been due to be repaid in full in 1947, Chamberlain converted them to “perpetuals”, giving the government the right not to pay back the loans if they so wished, as long as they continued paying the 3.5% interest. Surprise, surprise – no government since the 1930’s has chosen to repay these bonds. There are believed to be about 125,000 holders – some of whom might have inherited them from parents or relatives who bought them during World War One. The continued existence of the war bond debt is possibly the most graphic illustration of the lasting shadow cast by World War One.

How the War was Won

Ultimately, the First World War, like any global war, was determined by economic resources. Once the Central Powers failed to achieve an early victory in 1914, the Allies were able to increasingly mobilize their far superior economic resources better both on the home front and at the front lines. The Allies had a massive advantage in terms of total GDP, population, military personnel, armaments production, and food supply throughout the conflict; a situation that became even more pronounced when the United States finally entered the war on their side. For example, in November 1914, the Allies had 793 million people under their control, compared to 151 million for the Central Powers. The Allies had access to 5.2 times the population, 11.5 times the territory, and 2.9 times the output of the Central Powers. By the end of the war, the Allies had a total population of 1.272 million (70 percent of world total), whereas the Central Powers’ total was still under 200 million. Also, in terms of aggregate GDP, the Allies possessed a combined GDP of 1.761 billion at the end of the war, which was far superior to the less than 400 billion the Central Powers had in 1915. The Allies were able to mobilise production, public finance, soldiers, and weapons faster than the Central Powers which gave them advantages in output as well as quality. They also learnt to share their war time responsibilities and co-ordinate their efforts better than Germany. The collective mobilization of resources by the Allies was too big an obstacle for Germany to overcome.

The Allies more democratic institutions also supported the demands of the total war effort better than their authoritarian counterparts. For example, in agriculture, the Central Powers, with their large peasant sectors, could not maintain agricultural output as wartime mobilisation redirected resources away from farming. The resulting urban famine undermined the supply chain behind the German war effort. It was the economic disorganization in Russia, Austria-Hungary, and Germany that ultimately brought these states down. Industrial Britain on the other hand, used market forces to improve the quantity and quality of output. British farmers were offered higher prices and – responding normally to incentives – boosted production.

By the end of the war, the Allies were maximising resources and out producing the enemy, in every war winning technology – planes, heavy guns, tanks and ships. The Allies were also evolving and sharing new battle tactics to use these weapons more effectively. The Allies in 1918, included America with the most money, France with the biggest army and Britain with the largest Navy, which increasing blockaded the Germans and overwhelmed Germany into submission. The ability to mobilize effectively for prolonged conflict and being able to command substantial resources were the key factors in winning the war. Thus, the Allies had the edge that ultimately gave them the victory.

The Economic Impact of War