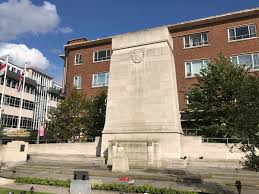 We tend to approach war memorials with pathos and a narrative about the futility of war, but the generation that built them were actually proud of them.  People wanted to show the pride of sacrifice. They even experienced joy that their fathers, husbands and sons, had stepped up to the plate in the time of need. War memorials were defined in positive terms – as ‘Defence against aggression’, for ‘Justice’, ‘Liberty’ and Glory’. They were a sign of a colossal generational effort to “end all wars, for humanity” and celebrate the gift, that those who fell, gave to future generations. There were all sorts of ideas put forward for commemorating the war and the people who fought in it, which resulted in a wide variety of memorials. There were official tokens of remembrance in the form of memorial plaques, issued to relatives of the fallen and commemorative “Peace” medals. Charitable care for ex-Servicemen was begun under the auspices of the Flanders Poppy Fund. The red poppy is now internationally recognized as a symbol of Remembrance, with its roots in the tragedy of the First World War. Memorial rolls of honour were put up in factories, sports clubs, railway stations, schools, and universities. Church windows were designed and dedicated to military units or individuals. Memorial buildings were constructed to provide “living memorials”, for example, as community centres, places for rehabilitation or worship.

After the First World War, communities were keen to erect memorials to remember their dead. Over 5,000 memorials were raised in towns across Britain, in the first two years after the War, and some 37,000 exist today in public spaces, in various forms. The demand for war memorials lasted many years and many were not completed until long after the war. Memorials represent the mixed emotions people felt towards the end of Great war, some triumphal, brooding, sentimental, often reinforcing the horror of war.

The first and earliest war memorials in Hull, were the ‘Street Shrines’ or ‘Rolls of Honour’, These were created in the early years of the war to commemorate all those locally serving in the armed forces. The idea of Street War memorials started in the East end of London, but it was soon adopted in towns, such as St Albans, and became particularly widespread in Hull.

In 1915, St Marks Church was the first to erect a large, wooden board, on the railings outside, showing all the men from St Marks Street serving in the war. The Memorials took many shapes, forms and styles. Some included only those directly involved from the street, others included relatives from other streets. Some ‘Roll of Honours’ covered large areas, such as Wilmington and Sculcoates, which included many streets. A great deal of work went into designing these ‘Rolls of Honour’. Committees were set up and Ladies went round collecting names, information and money. The names of servicemen, were often written on paper scrolls, or scratched onto wooded boards, and displayed prominently on Street corners. The memorials were often so highly decorated, with flowers, flags and patriotic pictures, that they took the form of ‘Street Shrines’. There was keen competition between Hull Streets for the best memorials. Montrose Avenue, boasted the finest Street Memorial, Courtney Street the largest, and Northumberland Avenue drew the largest crowds. The opening ceremonies were grand affairs, with bands, choirs, hundreds of people attending and widely reported in the local newspapers. It was reported that the unveiling of the Wilmington Roll of Honour, on the 12th November 1916, attracted over 10,000 people (HDM 13/11/1916). Some opening ceremonies caused incidents, such as the unveiling of the New George Street memorial, on the 8th October 1916. Here, Thomas Boast, the local Greengrocer, had failed to display a flag in his shop, and was attacked by a crowd for being unpatriotic. For example, Emily Atkin, from New George Street and Alice Brown, from Scott Street, were fined £5 for breaking his shop window and accusing his wife of being ‘Austrian’.

While Street memorials were widely popular, they relied on the goodwill of residents to maintain them. Inevitably these ‘Rolls of Honour’, could not keep pace with conscription, or the movement of men between regiments and armed services, during the four and half years of war. There was also some opposition to the memorials, with people refusing to include their names or saying that the money should be spent on the troops. Some complained that names had been mis-spelt, left out or ignored. Others were forced to move after the death of their husbands and their connection with the street was forgotten. The memorials were often too small to record the increasing numbers of casualties. For example, Bean Street, lost at least 93 men in the War; Waterloo Street 75; Barnsley Street 59; Walker Street 52, Spyvee Street, 51; and thousands of men died from the Hessle Road, Beverley Road and Holderness Road areas. The declining enthusiasm for war, meant that many Street memorials were not updated after 1916. For example, the current Eton Street, marble memorial, bears little resemblance to its original, which included many more names of men killed in the war. As well as these omissions, there were also spelling mistakes, wrong initials or nicknames used on street shrines which compromised their accuracy. Sometimes the same servicemen appeared on several memorials, as they moved address, or were included by relatives in different streets. Also, as most ‘Street Shrines’ were only designed as temporary structures, they were not long lasting. The Courtney Street memorial was not updated after 1916 and fell into dis-repair. It was discovered years later in a shop attic and re-erected in 1924. Many Street memorials were destroyed during the Second World War blitz, which devastated Hull. Others were lost through slum clearance in the 1970’s and post war reconstruction. For example, the Portland Street Shrine, was removed for safety in 1941, and placed in St Stephen’s church , which was then destroyed in the Blitz, in the same year. Only Waller Street attempted to update their memorial after the war, but this has now disappeared. Just a few examples of Hull Street memorials survive today. Most notably, these are at Sharp Street, Newland Avenue, and Eton Street, on Hessle Road. Some other examples of street shrines are also preserved in the Hull Transport museum. Street Memorials were never repeated during the Second World War. The following ‘Street Shrine’ details were reported in the Hull Daily Mail during 1916. They give some idea of the popularity of Street Memorials, and the large numbers of men who enlisted. They also indicate the impact of casualties on these Hull communities.

Conway Street , Rosamond Street, and Sefton Street memorials showed 167 men serving, seven of which had been killed by 12/09/1916;

Lockwood Street, shows that the Tock family at No:21 have 11 family members serving, including 7 sons. There are also 4 Gorrods, 3 Keeches’, 3 Lambert’s, and 4 Woods’ serving. By 1916 it already shows 16 killed, 2 wounded and 2 Prisoners of War. Lorne Street – 8 killed, 19  wounded, 2 Prisoners of war and 2 others discharged.

Montrose Avenue, Gibson Street had 19 houses with 31 men serving, including five brothers. By 28/11/1916, three had been killed, one was missing and 11 others had been wounded.

Porter Street and Michael Street – 116 men serving from 88 houses, of which 14 had been killed, 14 wounded, three of them wounded three times, and three others were Prisoners of War. Witty Street -70 men serving, of which 2 had been killed;

Hull had many more Street Memorials during the First World War. While these have now largely disappeared you can search this website to find the casualties on each street in Hull. This website records over 9,000 men from Kingston Upon Hull, or with a Hull

Many Hull firms, such as Reckitt’s and the Wilson Shipping Line had workplace memorials. The Hull & Barnsley Railway Company, displayed a bronze plaque, with the names, of 183 men killed in the war. Unlike Belgium, France and Italy, the majority of Britain’s 750,000 war dead, are buried abroad and have no known graves. The British Government did not repatriate the war dead. This distance, absence from home, and deep sense of loss, has remained a strong part of family histories ever since. It is the reason why war memorials continue to be important in Britain, and commemorating the First World War still remains heartfelt, even after a 100 years. Workplaces also created their own war memorials. Hull’s world famous Reckitt’s firm, saw 70 of its men join at the outbreak of war and by 1917, 820 men had enlisted. A total of 1,108 Reckitt employees, served from its world wide workforce, with 153 employees killed and 50% of the remainder wounded or disabled. In tribute to their service, Sir James Reckitt erected a memorial fountain in the grounds of its Hull Office. The Hull Post Office raised a white marble plaque at their sorting Office, in St Peter’s Street. The Hull and Barnsley Railway Line commissioned a bronze plaque listing the 178 employees who died in the First World War. The ‘ww1hull.org.uk’ site, recreates these memorials, to highlight Hull’s forgotten history. After the War, remembrance became paramount, to ensure that the dead had not died in vain, and because so many men had no known grave. Like London, Hull built its own cenotaph to remember its war dead. It was erected at Paragon Square, Ferensway, to a design by T. Harold Hughes. Paid entirely through public donations, at a cost of £24,000, the Cenotaph was built by Quibell and Son (Hull), and unveiled on the 20th September 1924. The Hull Cenotaph is a simple, design, devoid of any representations of heroism and victory, or any religious symbolism. It provides a blank canvas for the viewer to project their own feelings of war. Hull’s Cenotaph remains a successful design. Even today, it still evokes the eternal, human feelings, of death and loss. It bears the following inscription:- As a practical memorial to those who survived, Hull established the City of Hull Great War Trust, in 1918. It was funded through voluntary donations and used to help those wounded and disabled and the dependents of those lost in the war. The Great War Trust was a unique idea pioneered in Hull and helped men and women from all forces, including the fishing fleet and mercantile marine. The Trust distributed nearly £300,000 and assisted over 4,000 people before it was closed in 1983.

On the 16th October 1927, the Kingston Upon Hull War Memorial was unveiled at the French village of Oppy. This remembered the men of Kingston-upon-Hull and all local units who gave their lives in the Great War: Many of the casualties of 31st Division who died at Oppy were from the Hull area. The ground of which the memorial stands was donated by the Vicomte and Vicomtesse du Bouexic de la Driennays in memory of their 22 year old son Pierre, an NCO of the French 504th Tank Regiment who was killed in action at Guyencourt on 8 August 1918. It too, is located on the village square of Oppy.

For other memorials see the following link

Thank You to “Hull, the Good Old Days” Facebook, for the above photos.