Defence of the Realm (DORA) Act

The Government introduced new laws to help pay for and win the war. This started with the ‘Defence of the Realm Act or (DORA) in 1914’. Basic tax increased from 6% to 30% and the number of people in Britain who paid tax, tripled to 3.5 million. Clocks went forward to make the most of daylight hours. 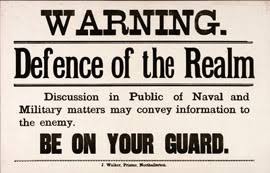 The Government took over coal mines, shipping, railways and land to secure supplies and food production. It set up ‘state run’, munitions factories and worked with Trade Unions to prevent strikes. All beaches along the East Coast were closed during the war.

alarm, or loiter around railways and tunnels. You could not spread rumours, trespass on railway lines and bridges, ring church bells, melt down gold, or silver, or use invisible ink when writing abroad. Alcoholic beverages were watered down and pub opening times were restricted to noon to 3pm and 6:30pm to 9:30pm (the requirement for an afternoon gap in permitted hours, lasted in England until the Licensing Act 1988 was brought into force). The law was designed to help prevent invasion and to keep morale at home high. It imposed censorship of journalism and of letters coming home from the front line. The press was subject to controls on reporting troop movements, numbers or any other operational information that could be exploited by the enemy. People who breached the regulations with intent to assist the enemy could be sentenced to death. It is estimated that almost one million people were arrested for breaching DORA rules and 11 ‘German Spies’ were executed under the regulations. Though some provisions of Dora may seem strange, they did have their purposes. Flying a kite or lighting a bonfire could attract Zeppelins, and after rationing was introduced in 1917, feeding wild animals was a waste of food. Pigeon racing was stopped, so pigeons being flown were in training or in the service of the Government. There was a penalty for shooting one or not handing over an injured one because it would be regarded as helping the enemy.

The DORA legislation was amended six times during the war, to increase social control, help prevent invasion and keep morale high. Curfews were introduced and their was censorship of letters and newspapers. Germans living in the City could be interned. Pubs shut at 11pm for the first time, and ‘treating’ or buying your friends a round of drinks was banned. New factories were built with work canteens, wash rooms for women and even creches for children of working mothers. Exempted trades or reserved occupations were introduced. On 27th January, 1916, there was compulsory conscription of single men, aged between 18 and 41 years. Four months later, this conscription was extended to married men. In May 1916, clocks were brought forward for the first time, to maximise working daylight hours. ‘Blackouts’ were introduced in certain towns to protect against air raids. People were fined or faced imprisonment for breaking any one of hundreds of new regulations. In Hull, fines of 10 shilling and sixpence were imposed for breaching lighting restrictions, and £5 fines were not uncommon. 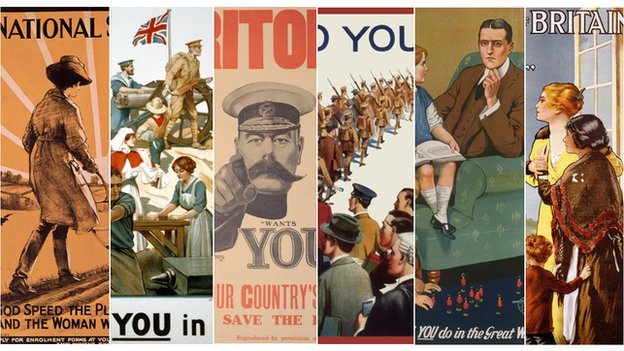 During the First World War, propaganda was employed on a global scale. Unlike previous wars, this was the first total war, in which whole nations and not just professional armies were locked in mortal combat. This (and subsequent modern wars) required propaganda to mobilise hatred against the enemy; to convince the population of the justness of the cause; to enlist the active support and cooperation of neutral countries; and to strengthen the support of allies. Government’s  tried hard to persuade people to think in a certain way. This is called propaganda. The British Govenment created ‘The Ministry for Information’ to produce propaganda. This was directed by the Canadian newspaper baron Lord Beaverbrook and actively influenced public opinion towards the war, using posters, news articles, and new mediums, like cinema film. For example, posters were printed that made the army look exciting. Other posters told men it was their duty to join and they would feel proud if they did.Some posters even tried to make them feel guilty, saying that their children would be embarrassed if their father had done nothing in the war. The messages were simple; support your country, support your soldiers, support your family, enlist, contribute, work. Posters were colourful and caught the eye, they were also everywhere.Stories about bad things the Germans had done were also encouraged. The Government knew people would be angry and even frightened. Everyone would want Britain to win the war and make the Germans pay for the dreadful things they were supposed to have done. Many of the tales were untrue. The Germans told the same stories about the British. Access to the front was strictly controlled and journalists were frequently given stories and facts to publish by official press contacts; in the early years of the war, the British government for example, continually put a positive spin on the bad news from the front, casting every failed battle as a heroic last stand. To bolster public hatred against the enemy, both sides also turned to atrocity propaganda, spreading stories about rape, murder, and torture to ensure that the civilians at home continued to call for war against the “savage Huns” or “British dogs”. As the war dragged on, civilians and soldiers became increasingly distrustful of official news and the use of propaganda became subtler and more refined. By the end of the war, winning hearts and minds was just as important as winning a battle, and propaganda at a national scale became an essential prt of any military action.