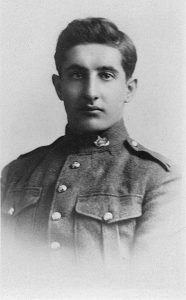 William Henry Curtin, listed on the Blundell, Spence & Co WW1 memorial plaque, Hull. He was born in Hull in 1898, lived at 28 Maple Street, Queen’s Road, he left school at 14 and worked at Blundell, Spence & Co. He joined the East Yorkshire 5th Cyclist Battalion, when he was 16, and later re-enlisted in the Royal Naval Volunteer Reserve (R/2041) Drake Battallion. He was killed in action on 30/12/1917 aged 19, and is buried in the Ruyaulcourt German Cemetery in Calais.