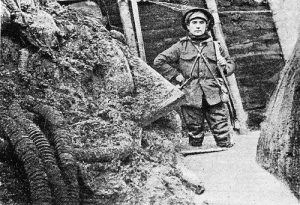 the 11th Battalion East Yorkshire Regiment, the second Pals battalion raised in Hull in 1914 and otherwise known as the Hull Tradesmen’s battalion as it drew many of it’s original recruits from those who worked in various trades across Hull. As part of the 31st Division the battalion had moved from England to Egypt in December 1915, where it occupied defences along the Suez Canal which was then threatened by the Turkish Army. In March 1916 the battalion moved to the Western Front where it spent the next year on the Somme, aside from a short period in Northern France, taking part in the fighting for Serre in November 1916. This photograph was taken in December 1916 after the first major snowfall on the Somme had melted, flooding the trenches. This particular trench was close to the village of Hébuterne and on the left of the image flexible tubing is visible which was part of a British trench pump system. The problem with alleviating this flooding is evident here. The soldier from the 11th East Yorks has a woollen cap comforter on under his steel helmet, a common practice during the winter months on the Western Front.