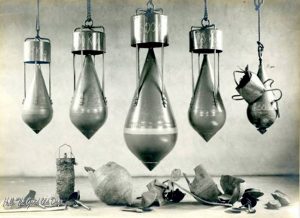 On 16 June 1915, the Zeppelin L.9 commanded by Kapitanleutnant Mathy made landfall at Bridlington and then followed the railway line down to Hull. Around midnight, Mathy dropped flares to light up the docks. 13 high explosive bombs and 50 incendiaries were dropped which destroyed 40 houses and killed 24 citizens of Hull. Hull was completely unprepared for such an attack, but luckily HMS Adventure was under repair at Earle’s at the time and she opened fire on the Zeppelin, although this gallant action failed to prevent the outrage. Later, mobs retaliated by ransacking shops with German-sounding names.