Pte Simon Levine 5288 and Pte Harry Furman (pictured), 6868 of the 1st/4th East Yorkshire Battalion were both recipients of the British War Medal and Victory Medal. These two young men died on the Somme for their country in January 1917. They were sons of recent East-European Jewish immigrants to Hull.

My grandfather’s eldest brother Harry, born in 1896, helped as a boy in the Furman shoe business on Mytongate. The family recall an adventurous type who crossed the Atlantic with his brother Aby, to work as a waiter, apparently at one time valet for the Governor General of Canada – one Prince Arthur, 3rd son of Queen Victoria. On 10th September 1912, Harry Furman, son of Barnett (and Leah) of Hull, England, crossed at Niagara Falls from Canada into the USA. He is 5ft 21/2in, brown eyes and hair, medium complexion, carrying $25, a 16-year-old bell boy headed for the upmarket Tennessee Valley Club, Rochester New York. 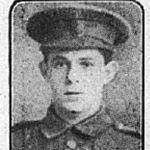 Simon, born in 1895, was the eldest son of fish merchant Solomon Levine and his wife Annie. He was named after his paternal grandfather back in the Minsk region (at Slotsk, whence several Levine and Levin families hail). They lived at 39 Myton St in 1901, and by 1907 84 Osborne St, where Simon assisted his father in the business, and the Levines later ran one of the famed fish fryers of Osborne St (another being my great-grandmother Barnett’s). Simon’s brother Jacob was  grandfather of my school-mates Jonathan, Edward (A”H) and Simon R. Levine.

Harry and Simon are likely to have been pupils together at Osborne St School. Harry returned to Hull in 1916 to the growing family of younger siblings at 45 William St, and volunteered with the 4th Battalion East Yorkshire Regiment, possibly at the same time as Simon. Barnett Furman came to see off the soldiers at Paragon Station, and threw the day’s shoe-stall takings through the window into the carriage, as the steam train pulled away. Corporal Furman, as he is noted in one list, was a military bicyclist, a role for which competition was particularly keen. In his first week in Flanders, the 1st/4th Battalion under Lt Col W.T. Wilkinson was working in trench support, 20km south of Arras in the North of the Somme, as the allies planned to advance toward the defensive Hindenburg Line. It was “a quiet month” in which trench foot was the biggest danger, with shelling occasional.

According to the declassified War Diary, on Monday 15th January 1917 the Battalion returned from draining Yarra Bank to Bazentin no.4 site; the only action noted down that day by Major H.B. Jackson is “casualties two other ranks killed”. The Furmans heard that Harry lost a leg trying to rescue his pal Simon Levine, who died of his wounds that day age 21. Harry’s death from wounds is recorded the next day January 16th, he was 20. Both are buried at Bazentin-le-Petit Cemetery. Simon’s grave location reference is F1 and Harry’s F2. The boys’ mothers received a half-crown War Pension.

In 1927 A.K Jacobs, then a well-known Hull tailor, later Lord Mayor, toured the cemeteries of Flanders, bringing back blooms plucked from the graves of the two soldiers, and presenting them to their mothers. Following the family’s requests over many years, Simon’s grave-stone was finally changed to a Star of David, after the intervention of his name-sake great-nephew, who heads a top global law firm.

Thank you to Prof. Philip Sugarman MBChB MSc MBA PhD MD FRCPsych,  for the above article, published in the “Watchman” and sent on 23/06/2018.