At the time of the First World war, almost all Housing in Britain was privately built. Home Ownership was for the privileged few and over 90% of people rented their homes privately. In Hull 98% of people rented their home. Newspaper advertisements, reveal that a “desirable” home in the Avenues of Hull could be brought for the princely sum of £350, (about £20,000 in today’s money),or rented for just £26 per year. Thanks to a heroic Rent Strike by Tenant’s in Leeds, and women in Glasgow, the Government introduced the 1915 (Rent Restriction) Act, whereby rents were restricted to their August 1914 level. This prevented landlords from profiteering during the war years when demand for housing exceeded supply.

Most people lived in “slum” conditions.  Slum is a British slang word from the East End of London meaning “room”, which evolved to “back slum” around 1845, meaning ‘back alley, or “street of poor people”. Homes were tightly packed, poorly built, unhealthy, and overcrowded. They lacked basic amenities, such as reliable sanitation, running water and electricity. Neighbourhoods could also be unsafe and lawless, and there was limited security of tenure, meaning you could be evicted at short notice. Rents varied, but were affordable. The 1914 Retail Price index shows that the “Working Classes”, spent 60% of their income on food, 16% on rent and rates and about 12% on clothing. Rents in Hull did not exceed £26 per year during the war.

The 1890 Working Classes Act, had allowed local Authorities to build Council homes, but few did so. Britain’s first Council Estate, was the Boundary Estate, built in East London, in 1900. It still survives today. Hull built its’ first Council Houses at Great Union Street, in 1904, but the rents were high and only affordable to skilled workers with a regular income.

In 1918, the Prime Minister, David Lloyd George, promised that Britain would build homes “fit for heroes who had won the war”. A promise not only to reward ex Servicemen, but to avoid a Russian Revolution happening in Britain. In 1919, the Government passed the (Addison) Housing Act (named after Dr. Christopher Addison, the Health Minister). It encouraged Council’s to build more houses and led to Hull Corporation building 10,000 homes in West, North and East Hull. The 1919 Housing Act was passed initially as a temporary measure to help meet housing need, when private builders could not meet the demand. It was generally assumed that the private sector would resume responsibility for working class housing once the British economy had recovered.

There was a severe shortage of housing in Hull. The City’s population was nearly 300,000, even larger than today, and most people lived in the overcrowded City Centre and Hull Dock areas. War time conditions had prevented new house building and allowed only the minimum of essential repairs. As a result, the general standard of Hull housing in 1919 was well below that of 1914. It was estimated that in 1919, a total of 5,000 new houses were required in Hull, just to make good the deficit caused by war. A further 2,578 homes were needed to rehouse people living in unhealthy areas. Another 200 homes were required to rehouse those living in individually, unfit houses, in different parts of Hull. The 1919 (Addison) Housing Act helped established Hull’s first Housing Committee and made the Council the chief provider of new housing. As a start towards meeting this shortage of 7,778 houses, Hull City Council purchased three areas of land on the northern, western and eastern outskirts of the City to erect housing estates. These became known respectively as the Bricknell Avenue, Gipsyville and Preston Road estates and house building began in the 1920’s. The rehousing of people from the Victorian streets to modern estates on the edges of Hull meant the breaking up of old close knit communities and the creation of new ones.

On most estates, houses were provided with a generous sized garden to encourage tenants to grow their own vegetables, a privet hedge at the front and an apple tree at the back. The interiors varied, some having a parlour, but all with a scullery and bath. 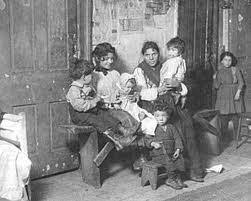 For most new tenants, these new conditions were a huge improvement on their previous slum housing, where they had experienced overcrowding and often without water, toilets, electricity, and transportation. The quality of the new housing was generally high. Although some slum clearance took place during the 1920’s, much of the emphasis of this period, was to provide new general needs housing, on greenfield sites. The new houses had electricity, inside toilets, fitted baths and front and back gardens. The Council had strict rules for new tenants on housework, house and garden maintenance, children’s behaviour and the keeping of pets.

The 1919 Housing Act, made housing a national responsibility, and local authorities were given the task of developing new housing and rented accommodation where it was needed by working people. The 1919 Act provided 213,000 new Council homes across the country. Although insufficient to meet the National need, it was a marked increase on the 24,000 ‘social’ homes that existed in 1914.

Godfrey Mitchell, a demobbed Royal Engineer Officer, that had served in France, acquired the Wimpey Home Construction business and built many private homes in Hull during the 1930’s. The Woolwich Building Society lent 90% mortgages and allowed people for the first time to buy their homes. After the war, a typical 3 bed semi-detached house sold for between £540-£740.  Buyers needed a 5% deposit, with repayments at around 26 shillings a week and buyers were given a Government subsidy of £50 as a further incentive. Most of Hull”s new council estates, provided good quality housing for the better off, working classes, but did not provide a solution for the poorer people in society. Rents were relatively high and subletting was forbidden, so naturally the tenants in the best position to pay were selected. High rents sometimes meant difficulty in paying, as more applicants from unskilled occupations were housed.  Owner occupation increased rapidly in the inter war years, with first time buyers entering the market as the result of increased availability of mortgage finance, rising real term wages, job security and low interest rates, Social attitudes also shifted during the inter war period in favour of owner occupation, which increased from 19% in 1931, to 30% in 1951, to around 65% today. While many people were choosing to own the home they previously rented, the private rented sector remained the largest housing tenure, accounting for nearly three out of every five dwellings by the  end of the 1930’s. The system of rent regulation remained in place in England and wales, until “fair rents” were abolished by the 1988 Housing Act.